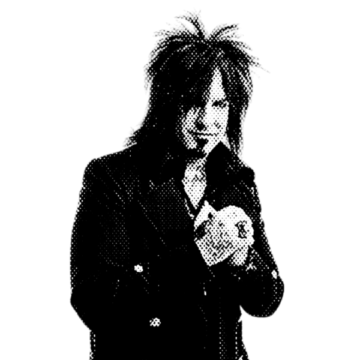 Nikki Sixx is an American musician and songwriter who is best known as one of the founders and the bassist and writer of the heavy metal band Motley Crue. Sixx’s early life and childhood were difficult; he was raised by a single mother who struggled to make ends meet. However, Sixx found solace in metal and rock music and learned how to play the bass guitar during his teenage years.

Frank Carlton Serafino Feranna, Jr. or Nikki Sixx was born on December 11, 1958, in San Jose, California. His father Frank Feranna is an Italian from Prato, Tuscany while his mother is Deana Richards.

When Nikki’s father left them, he was partly brought up by his mother Deana Richards. Later on, Nikki’s mother also left him and he moved in with his grandparents. Nikki relocated a number of times.

Nikki’s uncle Don Zimmerman is a producer and the president of Capitol records. Growing up, Nikki listened to metal and rock music and dreamed of having his own heavy metal band.

During Nikki’s teenage years, he lived in Jerome, Idaho. There, he became a teenage vandal. He shoplifted and even got into drugs. After being caught selling drugs at school, he was eventually kicked out.

Nikki’s was then sent to live with his biological mother. While he was with his mother, Nikki learned how to play bass guitar. He was also able to buy his very first instrument by selling a guitar that he has stolen.

When Nikki Sixx was just 17 years old, he moved to Los Angeles and he auditioned for bands and eventually joined the band “Sister” which was led by Blackie Lawless. After a while, Nikki was then removed from the band along with his bandmate Lizzie Grey.

In 1981, Nikki Sixx founded his heavy metal band Mötley Crüe with the drummer Tommy Lee. The guitarist Mick Mars and singer Vince Neil then joined them. The band recorded their debut album which was released in November 1981.

While with his band, Nikki got into heroin and was even quoted in The Heroin Diaries saying: “Alcohol, acid, cocaine… they were just affairs. When I met heroin it was true love.”

In 1991, the band released their compilation album “Decade of Decadence” and their singer Vince Neil left the band and was replaced by John Corabi. After releasing one album with Corabi, they removed Corabi from the group and Neil returned.

In 1999, their drummer Tommy left the band and was replaced by Randy Castillo. The group had a difficult time afterward and they reunited in 2004. They had a reunion tour in 2006 which featured all original members.

Nikki Sixx co-founded project group 58 in 2000. The group then released their album called “Diet for a New America”.

In 2006, Sixx formed another group “Sixx: A.M.” to record an audio accompaniment for his autobiography “The Heroin Diaries: A Year in the Life of a Shattered Rock Star”. They released the soundtrack in 2007 and the single “Life Is Beautiful” became a hit.

In the second quarter of 2021, it was announced that Nikki Sixx will form a band “L.A. Rats” with other artists. They then released their debut single “I’ve Been Everywhere”.

According to Nikki Sixx, he practices Transcendental Meditation. In an interview, Nikki said that he and his wife Courtney Sixx are working on a children’s book and a poetry or photography book.

Who Is Nikki Sixx’s Wife?

Nikki Sixx has been married a number of times. In 1987, he was engaged to Denise “Vanity” Matthews but they never got married.

In November 2010, Sixx was seen with the film producer Courtney Bingham and eventually Nikki announced that he proposed to Courtney. The two finally tied the knot last March 15, 2014. They now have a daughter named Ruby Sixx.

Nikki Sixx started his music career in 1981 with the band Motley Crue. He then went on to form other bands like “Sixx: A.M.” and “L.A. Rats”. Nikki has also written a few books including his autobiography “The Heroin Diaries”. Nikki Sixx net worth is estimated to be around $45 million.