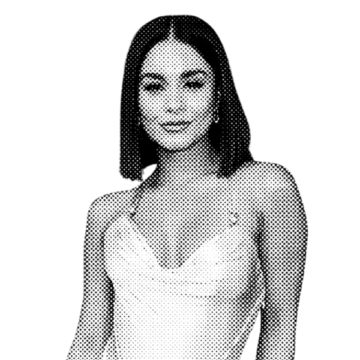 Vanessa Hudgens was born on December 14, 1988, in Salinas, California, and but she grew up along the West Coast, from Oregon to Southern California. Her mother Gina Guangco is a Filipina who worked in an office and her late father Gregory Hudgens was an American firefighter.

She only has one sibling, a sister named Stella Hudgens who is a social media personality. Vanessa and Stella are raised by their parents as Catholics.

She studied at Orange County High School for her high school education but eventually decided to be homeschooled when she started getting busy with her career.

Vanessa Hudgens started performing in musical theaters as a singer when she was just a kid. She performed in the productions of Carousel, The Wizard of Oz, The Music Man, and many more.

She had a successful career in musical theater then she started auditioning for commercials and tv shows. After getting a tv commercial, she moved to Los Angeles with her parents and sister.

Vanessa was first seen on the tv in the show “Still Standing” as Tiffany in 2002. She then starred in one episode of the television serial “Robbery Homicide Division”.

Her theatrical debut happened in 2003 in the film “Thirteen” where she had a supporting role of Noel. She then acted in the science fiction adventure film “Thunderbirds” as Tin-tin.

After the success of High School Musical, Vanessa released her debut studio album called “V” in 2006 where it sold more than 34,000 copies.

In 2007, Vanessa acted again as Gabriella in the High School Musical franchise. The film was released on August 28 and was a great success in the box office, making it the most-watched Disney Channel Original Movie of all time.

She then released her second studio album entitled “Identified” and she signed a contract with Hollywood Records. In the same year, Vanessa starred again in “High School Musical 3: Senior Year” and it earned $252 million worldwide.

After the success of the High School Musical series, Vanessa announced that she is taking a break from singing to focus on her acting career.

In 2011, Vanessa appeared in the films “Beastly”, and the action film “Sucker Punch”. The next year, she starred in the action movie “Journey 2: The Mysterious Island”. She also acted with Selena Gomez in the comedy crime film “Spring Breakers” in 2013.

Also in the same year, she acted in “The Frozen Ground”, “Machete Kills”, and “Choose You”. In 2014, she acted in the drama film “Gimme Shelter” which was directed by Ron Krauss.

Vanessa starred in Netflix’s hit movie “The Princess Switch” which was released in November 2018. The next month, she started with the actress, singer, and dancer Jennifer Lopez in the film “Second Act”.

She also appeared in the film “Bad Boys for Life” and by the end of 2020, she was chosen to host “MTV Movie & TV Awards: Greatest of All Time”.

In 2021, Vanessa was chosen to be the voice of the character Sunny Starscout in Netflix’s film “My Little Pony: A New Generation”.

Vanessa Hudgens faced some controversies in May 2016. She was fined $1,000 by the U.S. Forest Service after carving her initials on a stone in the Coconino National Forest.

The famous actress and singer Vanessa likes to travel and according to her, her favorite singer Alicia Keys is her inspiration. She also likes to workout and regularly goes to the beach with her family.

Vanessa Hudgens is active on social media. She is followed by more than 47.2 million people on Instagram, more than 17 million on Facebook, and more than 6.6 million on Twitter.

Who Is Vanessa Hudgens Dating?

As of now, she is currently in a relationship with the American professional baseball shortstop and outfielder in the Arizona Diamondbacks organization Cole Tucker.

Vanessa Hudgens rose to fame as an actress and singer after starring in Disney’s “High School Musical” playing Gabriella Montez. Since then, she has appeared in other films and shows. Vanessa Hudgens’s net worth is estimated to be around 18 million dollars.