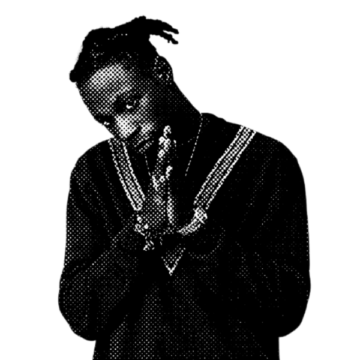 Joey Badass is an American rapper and songwriter who has achieved a great deal of success in a relatively short amount of time and is now considered one of the most promising young rappers in the industry.

Jo-Vaughn Virginie Scott or Joey Badass was born on January 20, 1995, in Brooklyn, New York, United States. His family is from the Caribbean and migrated to the US and he was the first one from his family to be born in the US.

His mom is from the Caribbean of St. Lucia while his dad is from Jamaica. He was raised in Bedford–Stuyvesant, Brooklyn and he finished his high school education at Edward R. Murrow High School. He studied acting but eventually he got interested in rapping.

Joey Badass started writing poems when he was in his teenage years. Originally, he used the name “JayOhVee” but he changed it to Joey Badass for some reason.

He is also the co-founder of the hip hop collective “Pro Era” or “Progressive Era” along with the rappers CJ Fly, Capital Steez, and Powers Pleasant who are his high school friends.

During an interview, he said that he was greatly influenced by the artists Nas, Tupac Shakur, Black Thought, MF DOOM, J Dilla, Andre 3000, Jay Z, and The Notorious B.I.G.

Joey Badass started uploading Youtube videos of himself freestyling in October 2010. One of his uploads on Youtube was reposted on the American hip hop site World Star Hip Hop and was noticed by Jonny Shipes who is the president of Cinematic Music Group and soon became Joey’s manager.

In the first month of 2012, Joey Badass released a video “Survival Tactics” with Capital Steez on their channel “PROfckingERA”. The following month, Pro Era released their debut mixtape called “The Secc$ Tape”.

In the same year, Joey Badass appeared on MTV News and became a guest on Sucker Free. He also released their debut studio album “1999” which was only released on music streaming platforms like Spotify and Apple Music.

Joey Badass released his second mixtape called “Summer Knights” on January 14, 2013, and the EP was released on October 29, 2013. The EP debuted 48th on the US Billboard Top R&B hip hop albums chart and he was included in the top 5 artists of MTV Jams list. He also had his first tour Beast Coast Concert Tour in 2013.

Joey had his television debut on March 4, 2016, during the second season USA Network series “Mr.Robot”. In the same month, he released his song “Devastated” and it reached the 25th spot on the Bubbling Under Hot 100 Singles chart.

Joey released the title of his second studio album “All-Amerikkkan Bada$$” on March 2, 2017, and the album on the next month.

On May 11, 2022, he made known to the public that he will be having his third studio album entitled “2000 The Album”. The album was then released on July of this year with gusts appearances from other famous American rappers and singers. He then had his summer concert tour which started in Boston.

The famous American rapper Joey Badass likes doing charity work. He has partnered with the non-profit organization Fund for Public Schools and has donated $25,000 to support some homeless students during the pandemic.

He also has his own website and a self-titled Youtube channel where he uploads his official music videos. His Youtube channel has now over 295 thousand subscribers with 84 million views.

You can listen to his music in all music streaming platforms like Spotify, Apple Music, Youtube Music, Deezer, and others.

Who Is Joey Badass Dating?

The American rapper Joey Badass is currently not dating anyone. In 2018, he has revealed that he has a child named Indigo Rain. He didn’t disclose more details about the mother but according to sources, Joey and the mother of his child are good friends and their child spends time with both of them separately.

Joey Badass is one of the most successful rapper, singer, songwriter, producer and actor today. He has released a debut studio album, a debut solo mixtape, and a total of two studio albums to date. He is one of the founders of the hip-hop collective called Pro Era. As of now, Joey Badass’s net worth is estimated to be around 6 million dollars.