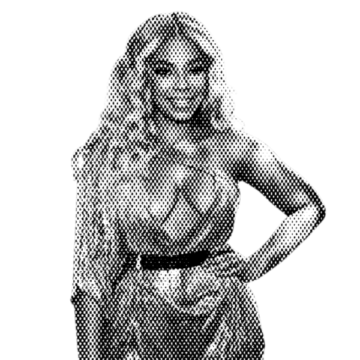 Ashanti Douglas is an American singer, actress, songwriter, and dancer. She is of African American and Native American descent. As an actress, she has acted in the movies “John Tucker Must Die” and “Resident Evil: Extinction”. She started her musical career after record producer Irv Gotti discovered her.

Ashanti Shequoiya Douglas was born on October 13, 1980, in New York to African-American parents. Her mother, Tina Douglas, was a former dance teacher, who is now a producer, and her father Ken-Kaide Thomas Douglas was a singer.

She is the oldest in the family and she has one sister named Kenashia “Shia” Douglas who is a social media personality. Accordingly, Ashanti’s mother named her after the Ashanti Empire in Ghana where women had power and influence.

Ashanti was just 12 years old when her mother noticed that Ashanti has a great voice. While she was still in high school, Ashanti started writing her own songs and joined local talent competitions.

The singer and actress Ashanti entered the entertainment industry at an early age. In 1992, she had a minor role as a child actress in the film “Malcolm X” which was directed by Spike Lee followed by Ted Demme’s “Who’s the Man?”.

Ashanti also took part in the film “Buffy the Vampire Slayer” as the character Lissa. She also had minor appearances in various music videos.

Ashanti started her singing career after she was discovered by the American record producer Irv Gotti. She started as a background vocalist for rappers Big Pun and Cadillac Tah.

In 2002, Ashanti made her debut in the music industry and released her debut single “Foolish” which is her biggest success to date where she was on the Billboard Hot 100 in 10 weeks.

Ashanti’s self titled debut album “Ashanti” was released in April 2002 under Murder Inc.

Ashanti then received a number of awards including more than 5 Billboard Music Awards, American Music Awards, and a Grammy Award for Best Contemporary R&B Album. She was also nominated for Best Female R&B Vocal Performance.

Before releasing her second album, Ashanti performed at the VH1 Divas Duets. She sang with the Isley Brothers and Stevie Wonder, and in the performance of Wonder’s “Higher Ground.”

In 2003, the singer released her second album called “Chapter II”. The album became platinum and was nominated for a Grammy Award for Best Contemporary R&B Album. In the same year, her voice was selected to be the voice of Randi in the animated series “The Proud Family”.

Ashanti then had her Christmas album “Ashanti’s Christmas” a month before Christmas in 2003. The album became a success and sold hundreds of thousands of copies.

In 2004, she released her third album “Concrete Rose”. The album became a commercial success and became certified platinum. She also released her limited edition DVD Ashanti: The Making of a Star.

Ashanti started focusing on her acting career in 2005 and had her feature film debut in “The Muppets’ Wizard of Oz”. She also appeared in “Coach Carter” as a pregnant teenager.

Ashanti starred in the comedy film “John Tucker Must Die” and the film was a commercial success. The next year she had a cameo role in the hit film “Resident Evil: Extinction”.

In 2008, she released her fourth studio album “The Declaration” and she became the ambassador of tourism for Nassau County in Long Island.

Irv Gotti made an official announcement in 2009 that Ashanti’s contract with The Inc. Records is ending soon. Ashanti then signed a contract with Written Entertainment and released her fifth studio album.

In November 2012, she was supposed to have her first serial “Army Wives” but it was canceled. In 2013, she had a guest appearance in “Law & Order: Special Victims Unit” and had a main role in “Christmas in the City”. Ashanti also received an NAACP Image Award.

In 2015, Ashanti started working on her seventh studio album. The next year, she worked with other famous singers like Alicia Keys and John Legend for the compilation “The Hamilton Mixtape”.

Ashanti has also worked with the rapper Ja Rule and made collaborations with Machel Montano, Ty Dolla Sign, Mack Maine, and Lil Wayne. Her latest single “Rock wit U (Awww Baby)” was released in March 2022.

Ashanti wants to keep her life private but we do know that she likes to travel and spend time with her family and friends.

She is now 41 years old, has never been married, and has no children. She is also an animal lover and owns a few dogs.

She also has her own website and a Youtube channel which was created on November 19, 2007, that has now almost a million subscribers with 649 million views.

You can listen to Ashanti’s music on all music platforms including Spotify, Apple Music, Youtube Music, and even Deezer.

Who Is Ashanti Dating?

Ashanti dated the famous rapper Nelly. The two met on January 1, 2003, during the Grammys Awards, and started dating the next month. In March 2014, they ended their 11 years of relationship.

Until now, Ashanti has remained single though she has been linked to other personalities in the entertainment industry.

The singer and actress Ashanti has a successful music career. She released her debut album or first album in 2002. She has also released a solo album, five studio albums, and a self titled album. She has also won a number of awards and Ashanti’s net worth is estimated to be around 5 million dollars.